To maintain a safe working environment powered supports have to be advanced sequentially. This is achieved by utilising an articulating Armoured Face Conveyor(AFC) which runs along the face with the shearer mounted on it. The AFC is made up of short sections, called pans,which allows it to “snake” along the face as the supports are progressivley advanced. Each powered support is pinned into a pan. Pans are normally 1.5 metres long and in recent years 2 m long pans are made to accommodate the increased width of larger powered supports. The AFC is powered by drive units located either at the maingate or tailgate ends or at both ends. The chain is driven along the face by the use of a gear and sprocket arrangement that transports the coal at a speed in excess of 1 metre/second. However some face conveyors are running at speeds as high as 1.6 m/s. Generally, the power and capacity of AFC are reflected by the motor size, pan width and chain size.

There are essentially three different configurations of the chains in the AFC, these are :

The out-board configuration is no longer used. 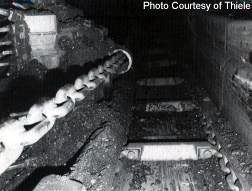 A single chain configuration is simply a single chain that runs down the centre of the AFC pan. This system is only used for short longwall or miniwalls and also for longwalls where the face has to be turned.

From the 1998-1999 Joint Coal Board Survey of Australian Longwall Mines, the following information about AFC’s has been calculated.